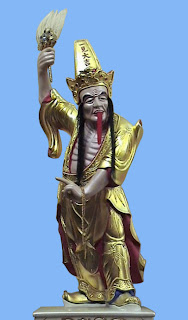 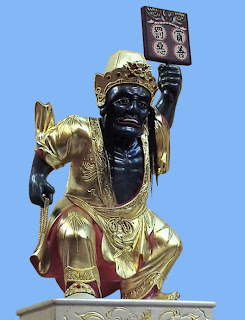 2 Gods Of Wealth From Netherworld:
Big Brother in White Robe - Dua Yah Peh(大爷伯) - Xie Bi An (谢必安)
2nd Brother in Black Robe -  Di Ya Peh (二爷伯) - Fan Wu Jiu (范无救)
The two Deities together, they are often known as Dua Di Ya Peh (大二爷伯) by the Southern Chinese of Hokkien and Teochews and also known as Hei Bai Wu Chang(黑白无常) in Mandarin.

There are more than a pair of Dua Di Ya Peh (大二爷伯) in the Netherworld, therefore the stories of how they died will be different.

They are known as Hei Bai Wu Chang(黑白无常) in the netherworld and not Dua Di Ya Peh (大二爷伯). Their appointments are like Sergeant Rank in the army. They are allowed to move freely between the Netherworld and Earth.

Since their life stories began in Southern China , they are known among the Southern Chinese and the  Oversea - Chinese in South East Asia but other parts of China may never know about these 2 Hell Deities.

The history goes like this... told by the White and Black Brothers  during trance..

Centuries ago, in a Southern province of China, there were two sworn brothers by the name of Xie Bi An and Fan Wu Jiu . Both were Constables working in the Government Office.

During that period, opium was introduced into China. Chinese was tricked into believing that opium was  Longevity Paste(长寿糕) by the British. Hence, many people including Xie Bi An and Fan Wu Jiu were taken in by these lies and became hooked onto them.

However, as a head of the constable then, the decision from Xie Bi An (谢必安) was vital. He was given 2 choices at that time, to take bribery, close an eye and continue enjoying with endless supply of opium or face death and expose the deadly drug in China.

Dua Ya Pek was already badly addicted by that time. If he chose the former offer, more Chinese will be killed from the drugs unknowingly. If he chose the latter, he will be killed from running out of opium stock very soon. As a responsible and a righteous man, Dua Ya Pek chose to save the Chinese and end his life by hanging himself from a rope just outside the City Gate.

Dua Ya Pek body was later removed by Dee Ya Pek. Dee Ya Pek was too distraught with the incidence and eventually decided to end his life by jumping into the sea the next day.

Dua Ya Pek was killed by hanging himself thus his tongue stuck out.
Dee Ya Pek die of drowning and thus his face is blacken.

In view of their righteous character and responsible personality, the Jade Emperor (Heavenly God) appointed them to becomes the constables of the hell. Beside carrying out law and order in hell, they are to capture the wondering spirits on earth and also required to provide ritual services in the human world  to help the human folks.

Both Dua Ya Pek and Di Ya Pek are two of the many other subordinates of  'Chen Wang Yeh' (城王爷) - A Judge In The Netherworld .

During consultation, when the human folks request for Lottery numbers from them, they will do a study whether the person is deserved to strike the Lottery and if yes, they will provide them accurate Lottery Numbers accordingly.

Often time when a  person is desperately in need of help, Dua Ya Pek or Di Ya Peh would personally give them very accurate Lottery Numbers to let them settle their monetary problems.

During important festivals such as their birthdays, Dua Ya Pek or Dee Ya Pek will definitely write down very accurate lottery numbers to let the worshipers and believers strike the Lottery.

Human Folks often time do prayer in front of their statues in the temple and seek Lottery Numbers by shaking a cup of Numbers written on small rolls of papers.

There is a popularly known fact - If anyone ever bump into them on the street at night or in the graveyard or along the dark alley or dark roadsides at night,  they will confirm strike the Lottery.

Folks considered these 2 Brothers as the 2 Hell Gods Of Wealth because they have the opportunities to strike the Lottery from the numbers given by them.

Take Note:
1) For Singaporeans / Malaysians / Indonesians/ Asian Countries:
Dua Di Ya Peh (大二爷伯) do possess the Taoist Mediums (Tankis) during Consultation Service in Temple. They very often come in pair. Approach them if You have important issue to seek help and not to look for them just for Lottery Numbers. During their Celebration Day, either one of them or they may give out Potential Winning Lottery  Numbers and they are very good at it if they want the worshipers to strike. Just hang around the Temple or Make-Shift Temple during their Celebration Day and You may get to see the Lottery Numbers written on Joss-Papers.

Learn How To Empower Your Taoist Deity and the Altar:
Consecration Of Taoist/Chinese Deity Statues